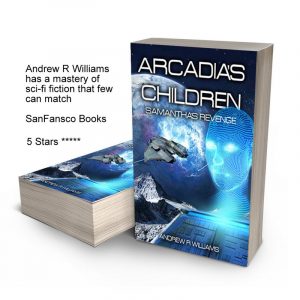 After changing shape several times, the ball eventually turned into a huge face. It floated alongside the air-car. This time, time instead of sending him a mental message, the face spoke out loud and the whole air-car vibrated with its intensity. “If you are foolish enough to renege on your contract, you will be severely punished. For your sake, I hope you wouldn’t do such a thing.”

When Tarmy made no attempt to respond, the face turned and pressed itself against the millipede-free window. A moment later, Tarmy felt the fat slug entering his mind, the sign that the face was attempting to use its powers to obtain his response by other means. But as the slug dug deeper, Samantha’s cover stories began springing out of the corners of his mind.

Instead of obtaining Tarmy’s agreement, all that the face saw was a burning army transporter surrounded by bodies. Undeterred, the face continued its assault. Samantha had anticipated that Tarmy might come up against an adept, so the mental images of death and destruction flowed unchecked.

After failing to break Tarmy’s defences, the face removed the slug and tried reason. “You can’t win, Mr Tarleton, so why don’t you do yourself a favour and cooperate? It will be better for you in the long run. Now, where is the miniature pulse drive engine?”

Tarmy realised why the giant millipedes hadn’t been allowed to attack. It was obvious that the Great Ones were hoping to retrieve the engine.

When Tarmy didn’t respond, the face said, “I am prepared to overlook your desertion if you agree to tell us where the engine is and also honour your contract by showing us how to convert the engine into a bomb.”


What they are saying about the Arcadia’s Children Series

Sandrabreed rated a book it was amazing ***** (Five stars)

Although, I find it difficult reading and being totally engrossed in scientific fictional books. It is not the case with this superb novel “Arcadia’s Children Samantha’s revenge” it is absolutely exceptional as every chapter kept me totally captivated and I could not help but kept on reading. This book is highly recommended as there is no dull moments as Samantha takes on revenge based on crucial information she has to take out her enemy. A must read

I really liked it (Five Stars)

Williams (Author) constructs a story about a shape-shifter and an advanced humanoid who has vengeance in mind. The potential for destruction of the world is always a risk in these novels. Afterall, AI is often programmed one way and acts in another way. It’s a battle between the heroes and villains. Those characters fighting through the worlds with leaders who have no qualms at refusing justice for mayhem.


Deborah Mann, BA (Hons), MA and former Editor-in-Chief of A49


Science Fantasy and Science Fiction are not usually the genres I turn to but a friend recommended Andrew William’s Arcadia’s Children: Samantha’s Revenge and I am so glad he did. Not only was it a fast paced thriller set in another time and world but it cried out for a sequel.

And here it is. Arcadia’s Children 2 : The Fyfield Plantation does not disappoint. Once again, Mick Tarmy finds himself in a dangerous situation through no fault of his own. Still having to carry the mantle of deceased criminal and outlaw, Mick Tarleton, Tarmy is loathed and adored in equal measure by those around him.
The trouble is that those who loathe him want him dead, and they don’t care who gets hurt in the process. And those who are most likely to get hurt are the people Tarmy cares about – as well as the waifs that he picks ups along the way, much in the way that other people collect stray cats. And to just to pile the pressure on a little more, he needs to save his daughter, Amanda.
Although Mick Tarmy’s battles seem be personal, after all, how many times can anyone be attacked without taking it personally, there is more at stake than his little group’s safety. Samantha, the evil antagonist from the last novel, is still hovering in the background, as are the Great Ones with their ruthless and savage armies, and the self-serving spettri, Irrelevant – all of whom want to feather their own nests regardless of the far-reaching destruction and misery they will cause.
Williams has impressed me with his ability to create plots within a plot and bring them together without any loose ends. A deeply satisfying novel, which I truly hope is going to be part of a substantial series.
Deborah Mann, BA (Hons), MA and former Editor-in-Chief of A49