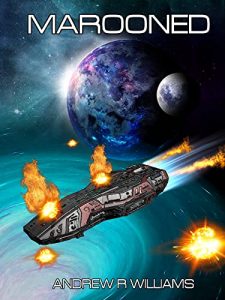 Which line in Marooned stood out from all the others in the book?
My father was a wanted man, a war criminal, and if it hadn’t been for an underground movement who’d helped us escape, he would have been serving life imprisonment or given a death sentence

General Summary for Context:
Bee Bee is an insecure teenager who was severely disfigured in an accident.  However, he realized that he has other attributes that could allow people to view him in a more positive light—namely, courage and risk-taking in adverse and dangerous circumstances. His father was a selfish, egotistical man who basically cared only for himself, but Bee Bee has a decent relationship with his stepmother, despite the fact that his father has a roving eye for another woman. Bee Bee finds himself, through the aid of a voice only he  hears in his dreams, responsible for saving the lives of others on his vessel as well as on the outside world.

Concise Review:
Unbelievable read. I felt both astounded and proud as Bee Bee navigates through the process of dealing  with the evil forces on board as well as the perils that await everyone on the outside as well. Each page is more action packed than the one before it, and I had to slow down the pace of my reading a bit so as not to lose any thread of the plot. From Mars to the vessel Arcadia and onward, it is with bated breath that I delved into the power that courage of conviction and the quest to do the right thing can have on someone so young and so marred by tragedy, as well as a non-supportive relationship with a parental figure.

General thoughts on the Novel:
into other worlds and perils of the unknown. Dealing with adversity, evil, and the unknown, one boy’s quest to help others arrive safely.