I was asked to do a survey on a house which had been owned by a drug dealer.

Of course, I had no idea that the property had been owned by a drug dealer when I picked up the keys from the estate agent.

However, the old antenna went up as soon as I arrived and I swifly realised it was a drug dealers house. 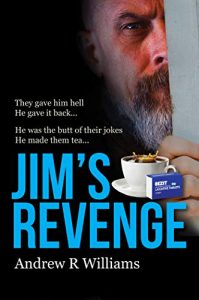 Five CCTV cameras were on the front elevation and more on the sides and back.

In addition, the property didn’t have gardens. All external areas had been covered in a thick layer of shingle.

In retrospect, I can only presume that the idea was that no one could approach the property without the crunch of gravel betraying an approach.

Inside there were similar clues and I became very careful.  Were there dangers like “sharps” knocking about?

In one of the bedrooms, the wall had been chiselled out. The hole gave access to the void under the WC pan in the bathroom.

The most telling feature was the solid core door in the main bedroom and the heavy-duty door frame, hinges and spy hole.

When I was carrying out the survey, it was just another job.

However, when I wrote Jim’s Revenge I was able to incorporate the drug dealers house into the plot.

It really was a case of “Write about what you know about”.